A poet with itchy feet 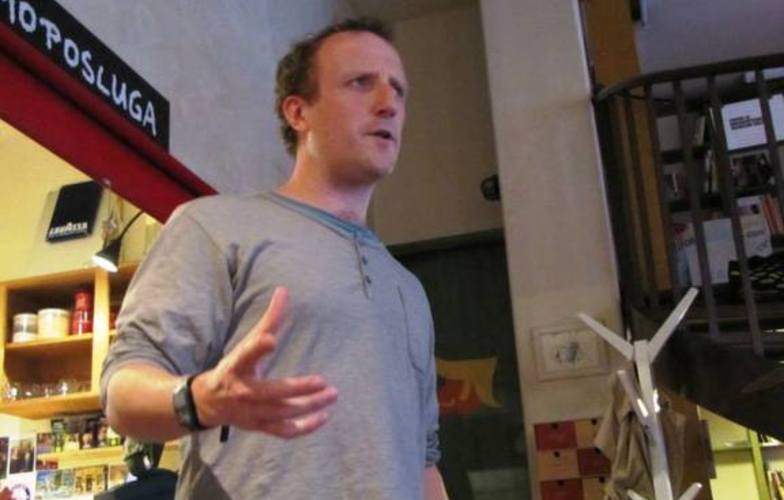 A+ A-
Irish poet Neil McCarthy is not only a poet, but also a performer. While touring around the world with his poetic show, he came by to our club Booksa in Zagreb. Our reporter Dunja Kučinac caught him before the show and discussed his work.

At the moment you're on a tour promoting your spoken word CD Live from the Laden. You're not a typical poet, so to say – you're a poet/performer. What is it about performing that excites you?
The chance to meet people and travel, definitely. A lot of poets are probably very happy to have a book which would be in a bookstore and sit on a shelf, that people would read so the poet could just sit home and remain anonymus, but I like to be out there with the people.
You've performed practically all around the world, mostly in US and Europe. What are the differences between American and European scene of poets/performers?
It varies from country to country. In America, for example, you can go to a slam. You have 15 minutes and it's sometimes agressive, sometimes very funny. In Ireland it's more laid back: you go to a library and people read from their books or scripts. In Romania they told me they've never come across someone who recites from memory and performs. They sit down and read.
You've performed in a lot of different places, from embassies to living rooms. How do you choose places where you perform?
I go wherever there's audience. If I think that the embassy or a little bar with the backroom where young people hang out would provide a better audience than a bookstore, I will go there.

Do you change your performance from place to place?
I like to get there earlier and see their faces. If there's an older crowd, I will taylor some poems towards them and if there's a younger crowd, I will probably do some unusual funny things.
You began writing poetry when you realized you wouldn't make a carrier as a guitar player. You perform a lot with musicians, though. What is the role of music in your performance? Is it a way to make your reading more attractive to audience or is it an integral part of your concept?
I would have to say there's both in that. You do have to present your poetry in a different way because a lot of people, when you say 'poetry', think of something elitist and boring so they won't come. But when you're mixing it with some indie/folk music, it's more accessible to them. I like to listen to my peers like Niall Connolly and guys who play a lot of songs which have very good lyrics. Then I can hear the mood of the song and think 'oh, this poem would go well with that song'. It seems that this concept of 'music & poetry evenings' is getting to be more and more popular. You just appeal to two different audiences – those who come for the music and those who come for the poetry. You're in a win-win situation.
It seems that many of your poems depict either atmosphere or the sceneries from the places you've visited. In a story 'Rainy Day in Shangai' you talk about an old globe that you bought and fell in love with geography. It seems you're a man who simply must travel. Why is it so? How is it related to your poetry?
In English we have a saying 'itchy feet'. Ireland is a great place to live, but it's also very small and isolated, and the population is very small. When I was around 21, I wanted to find any kind of inspiration other than what other people had already written about. So I just wanted to get out and see different cities, women, religions, foods and grow like that. As a result I have a lot of poems from those times in Shangai, Australia, South America, Russia, Finland... They were part of my life for so long, I lived there, breathed it. I'm sure when I go back to some of these places, buy a house and have children, I will write about rose bushes, swallows and spring.
What would be your private 'literary geography'? Who are the writers and poets that you read or listen to?
I'm guilty of not reading as much as I should, but I love getting my hands on something that I haven't heard about. Passing through Romania, I met and got to know about Romanian poets whom I've never heard of before. If you want names, I can mention Billy Ramsell, Stephen Murray, Sarah Clancy, Elaine Feeney – there's a really healthy scene in Ireland. I just came from US, where I met poets like Brendan Constantine, Rich Ferguson and Beverly Collins. I don't know if it's because the publishers don't really distribute it or the poets don't travel, but it's hard to build those bridges. But hopefully they'll come and read here at Booksa as well.